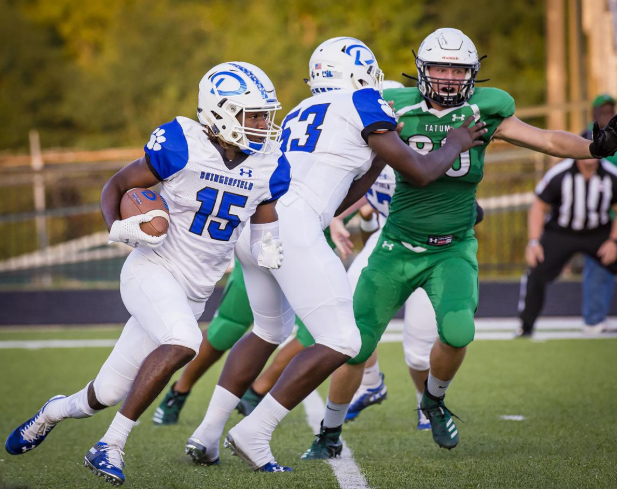 TATUM — Daingerfield’s defense shut down every Tatum opportunity for 48 minutes on Saturday night.

That showing in turn provided a chance for the Tiger offense.

Up 2-0 at halftime, Daingerfield took advantage of a short field on both of its touchdowns to take a 14-0 win over Tatum in the KYKX Game of the Week at Eagle Stadium.

With the win, Daingerfield pulls even on the season at 1-1 while Tatum drops to 0-2 on the young season.

Youth was in play both ways as both squads rolled out a number of underclassmen. Penalties and overall sloppiness were other worthy adjectives as well.

Daingerfield’s defense came away with three turnovers — two fumble recoveries and an interception — and forced three Tatum turnover on downs. The Tiger offense, meanwhile, went 0-for-11 on third down and had two third-quarter scoring drives of 29 and 34 yards. Credit a menacing Tiger defensive line and speed throughout.

Tatum’s defense hung in for the most part except with their backs against the wall. Eagle defensive back Dexter Monroe came down with an interception. The Tatum offense, however, mustered 46 rushing yards on 40 carries overall including negative-11 rushing yards in the second half.

Penalties were prevalent from start to finish with both teams combining for 20 flags, good for 190 yards.

Offensively for Daingerfield, Ja’Kobie Craver finished with 81 rushing yards and a one-yard touchdown run. Junior quarterback Zaylon Jeter had 121 passing yards and added a scoring jaunt of one yard as well.

Tyrese Grant, who had a 20-yard catch, came away with an interception in the endzone early in the second quarter.

Daingerfield got on the board with a safety with 3:01 left in the first quarter after a bad snap on one of 13 combined punts.

In the third, after Daingerfield went ahead 8-0 on Craver’s touchdown run, Chad Reeves forced a fumble that was recovered by JT Hayes.

The Tatum defense responded to the turnover with a quick three-and-out. A negative play, followed by a 24-yard gain then ended the next series with a second Eagle fumble, which was scooped by Daingerfield’s Evan Peel.

The two teams exchanged punts and turnover on downs the rest of the way.