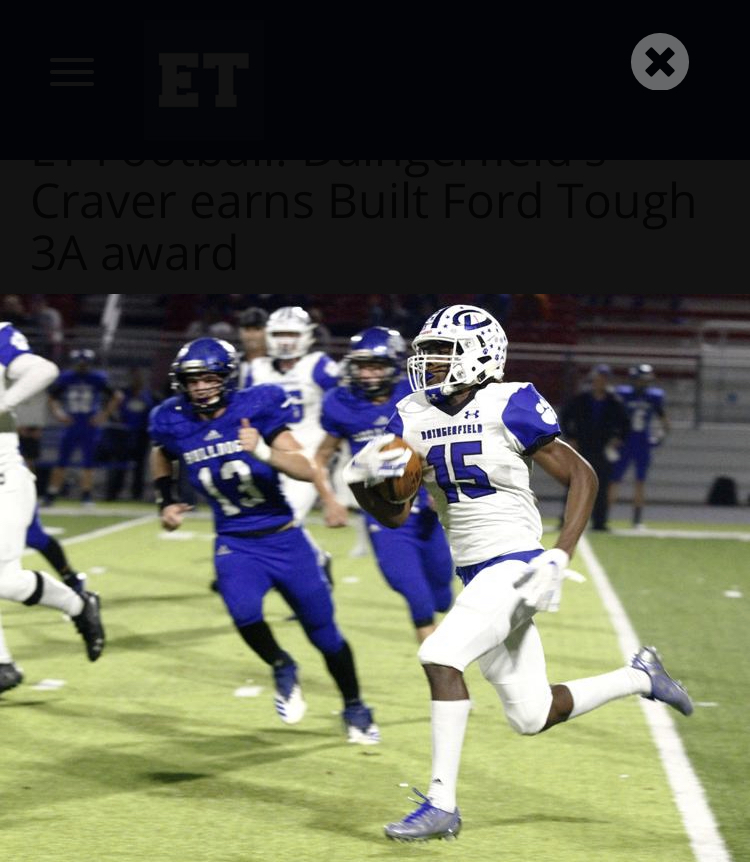 Craver, the Class 3A winner, was joined on this week’s list of honorees by El Paso-Americas running back Aaron Dumas in 6A, Georgetown defensive lineman Braden Hargrove in 5A, Pampa quarterback Tucker Bridwell in 4A, Bremond quarterback J.T. Anthony in 2A and Texas School for the Deaf running back Kodi Lee for private schools.

Craver carried 15 times for 262 yards and scored four touchdowns and also caught a touchdown pass in a 56-35 win over Waskom.

The Tiger standout caught a 21-yard TD pass in the second quarter, but Daingerfield trailed 21-14 at halftime before scoring 20 points in the third period to build a 34-21 lead. Craver scored on runs of 67, 55 and 33 yards in the third period, and then iced the win in the fourth quarter with an 81-yard touchdown run.

Dumas carried 24 times for 381 yards and four touchdowns in a 70-28 win over Pebble Hills.

Hargrove had four tackles, a tackle for loss, a forced fumble, an interception return for a touchdown, three blocked punts and three pancake blocks on special offensive plays in a win over Manor.

Bridwell completed 14 of 18 passes for 435 yards and five touchdowns and added one rushing toucheown in a win over Hereford.

Anthony carried 41 times for 373 yards and six touchdowns, passed for 71 yards, had 10 tackles and two tackles for loss on defense and also punted once for 70 yards.

Lee carried 39 times for 270 yards and three touchdowns in a win over San Marcos Academy.